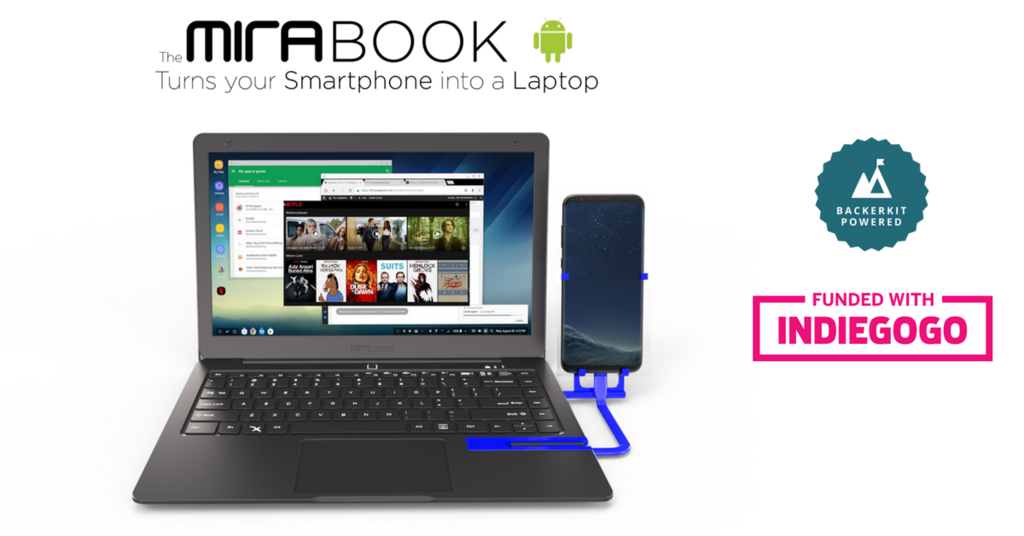 The Mirabook : Turn your smartphone into a laptop

Get the best lapdock to use your smartphone as complete computer.

Latest Updates from Our Project:

In this update, we will talk about some problems we faced and the incoming challenges. Like we said before, we will not provide any delivery date until we are certain of it. Here is what's going on:

-We lost almost 2 months negociating with battery suppliers because they didn't want to take our battery order. The reason was low volume, but in the end we succeded.

-We will receive all the components at the factory in April except for the batteries that will arrive middle of May. Early May we'll have 100 battery so we will start a pre-production. The objectif is to calibrate the assembly and the quality. Most of these units will go to certification labs. Once we are okey with the quality, we tell the factory to assemble 1900 units, that can be done in 2 weeks.

-Another challenge will be the deliveries. We are already in touch with 3PL companies that can handle that all along.

To sum up, the first part of the production is almost over (supplying components) and we are planning a date with the factory for the assembly. One of our team member is in China at the moment to make sure we are on track. We will go in China again in May to monitor and control the quality.

If you have any question, please go to the comment section. We will not reply to rude and troll people. Thanks in advance.

Very Proud to announce our first distributor in Japan and South Est Asia: HTL corporation. The Mirabook will be available in few weeks now. https://www.mirabook.info We still have few spaces available for meetings at MWC.

Thank you all for your strong support all along. The Mirateam is very excited for you to discover the result of 4 years of hard work and passion.

Because you are supporting the Mirabook project, we owe you some explanations. This story is about failure, like every good entrepreneur experience.
To tell you the whole story of Miraxess, we have to turn the clock back in 2012 when I was student in Business school. It was the golden age for new smartphone functionalities and Motorola just released its Motorola Lapdock which I found great and in advance on its time. I kept this lapdock idea in my head until I will finish my studies. In 2014 I started to find the right engineer that could participate to the project and help me create this. During the IoT trade show in my city, I met Paul-Emile that I knew from High school, and he immediately understood the potential and the challenge. Based on the Motorola Lapdock I had, we created a prototype and started to win startup contests.

End of 2015 we create the company Miraxess and started to work on a real prototype with different french engineering offices. During one year, we lost time and our personal money, working with the wrong people (around 100K€). This was a bad experience but at least we learned a lot. Then, To participate to the CES 2017, we started to work with China after we were introduced to the right person. We succeeded in doing a big ugly prototype in 2 months after failing for 1 year.

Based on this, we thought we were 6 months prior the production because that’s what our Chinese partners had estimated.Then we decided to launch a crowdfunding campaign to support the development and find customers for our solution. After this success (thanks to you), we raised money through private investors to strengthen our team. During the whole year of 2017 we pushed the engineers to get the final product but each time there were a problems and modifications. In 2018 we managed to have few dozens of prototype for CES in January, since that we have built a strong range of business opportunities, but as long as the production was delayed, we lost more and more money in salaries and other expenses. Early 2018 we have begun an intensive research for investors but we failed. The 2 main reasons are:

-Nobody wants to invest in Hardware startups

-The ones who do, wanted to wait for the production

We lost more money trying to find investors while the electronic board was close to being stable. At this time we were all very very frustrated and close to bankrupt. We barely managed to launch a batch of 50 units to test before launching the production. It appears that there were some mechanical finishing issue and some software bugs that we tried to solve. It seems that the Force finally went back to us because one of you, a backer, invested a big amount of money into Miraxess to restart the machine :) Thanks to him.

Finally, we have now a qualitative product that satisfies the team, and when we try to launch the production, we face a new issue: the parts pricing and availability. This will be solved shortly but still, it delays the production to march.

All this fails are part of this entrepreneurship journey and my associate and I will not pay ourselves from the project until everybody is satisfied by the product. We have now a competent and motivated team which faced hard times, dedicated to you. I totally support the Sentio team who struggled to deliver and that’s why I never criticized their work. If we had to do things again, I would do things completely differently and save time of course. We never intend to disappoint you, it’s the opposite. Having no revenue since 3 years is tough, but Paul and I would not change this for the world.

2019 is definitely the year of lapdocks and they will all pay a tribute to the Motorola Lapdock :)
Thank you for your support.

PS: When we started the project, I would have never thought it will be so hard, I can understand people and investors hesitating before going with a hardware startup but we need them otherwise nothing happens.

Here is a status on the Project:

We had to make electronic board modifications in order to pass the ESD and EMC certifications ( ElectroStatic Discharge and ElectroMagnetic Compatibility). Unfortunately, by making those changes, the bord started to get unstable and we had to rework it to reach a reliable experience, so we wasted few weeks doing trying to solve all issues. For instance, some very rare note 9 were not detected 100% of the time, or sometimes screen resolution was downscaled to 1336p without reason.

Believe us, it’s not easy to realize that. We thought we were close to manufacturing, but sometimes when you make a step forward, you actually make 2 steps backward.

After discussing with some people in electronic industry, they say it’s normal in the process of creation, but still, it is very unpleasant.

Like we said to some of you, the product exists, and the difficulty is to scale to thousands of units, keeping the same level of quality.

What will happen now?

Currently we are solving the last software issues, defining the quality control process, writing the assembly factory contracts and preparing our next trip to China to seal off product development.

December will be the month to prepare everything at the factory and January will be dedicated to assembly.

We are very disappointed each time we give you false promises for deliveries, that's why giving you a new delivery date will not help us go faster. Mirabooks will be ready when they will be ready, do not expect much on the time, expect much on the quality, because we are aiming high-end standards. In return we will communicate more on what we do and share moments to show you we still exist.

For those who say Miraxess has bankrupted

Our startup has officially raised $500 000 with private investors who believe, like you, that smartphones will replace PC.. They also understand that we have a big partnership to play with a big brands…

We had the opportunity to be invited for the Samsung Developer Conference where the Foldable was announced few days ago. It was a great opportunity to finally meet the Korean and American DeX team in charge of this awesome feature. We had a great talk on how to improve the experience and all kind of software interactions. We had the opportunity to test Linux on DeX which is a great technology progress. Some of us at the office are trying to work full time on it and it’s really amazing. We are going to send you a video on Linux on DeX + Mirabook.

We know you are disappointed again, but let’s stay positive for the good of the project that we all support. This future that we are building takes time, but it’s coming because of your strong support. Without you, there would be no adventure.

When we started this project in 2015, we didn’t expect that it would take so long to release the Mirabook. We discussed with different hardware entrepreneurs to get their testimonies and advices and thanks to them we were able to avoid many issues along the adventure.  Things are not progressing as fast as we expected nor as we would like but they are progressing, and all the team members have made great sacrifices to reach that point. Most of us have worked for free for 3 years and we had done it for you and the dream we share: Making mobile convergence happen, and it will.

The most difficult has been past, we have produced the first 50 units. This is a test production to detect any eventual issue and optimization that can be done on the incoming mass production. It took a lot of effort to release these devices, but we are very happy with the result.

“With Paul, we worked every day from 8am to midnight at the factory with all the technicians writing an assembly document to learn the best way to build the units and check every component. It was 2 intense weeks but, in the end, we are very happy with the building material. It feels premium like we wanted and there’s very few optimizations.” – Yanis CEO

Here are the different optimizations remaining:

-Shell production process optimization because we have detected a tiny axial issue due to too much material that could alter the longevity of the product.

-There is too much material on the colour touch mold that we need to reduce to ease the clipping method to put it in and out.

-We need to fix the keyboard layouts because Android does not support some keys.

-A new board version is in production to improve the stability and compatibility.

-We have some software optimization to do to improve the trackpad latency that is very acceptable but detectable for some experts.

-We will add some conductive tape to pass the ESD/EMC certifications.

Since early September we already work on all of this. There’s a week of vacation in China in October so we expect to be ready to make the mass production purchase order for the 2nd week of October. In that case you will receive your Mirabook in December. Be aware that at this point we may encounter a new problem to solve that can delay a bit the deliveries. Again, we are as frustrated as you for this and we thank you for your full support so far. Thank you also to the big companies and partners willing to pay between $500 to $1000 to buy these test units and help us improve the product.

Please keep in mind that because we are a small team of 5, it takes a lot of energy and time to respond to all the negative message and it takes us away from working on the real production.  The most important thing is that we are 100% commited to this task, everyday.

Hope you guys are all good, Peace.